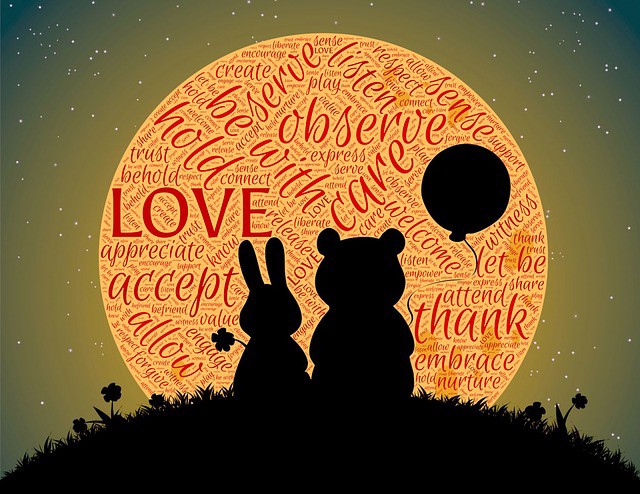 It occurred to Pooh and Piglet that they hadn’t heard from Eeyore for several days, so they put on their hats and coats and trotted across the Hundred Acre Wood to Eeyore’s stick house. Inside the house was Eeyore.

“We just thought we’d check in on you,” said Piglet, “because we hadn’t heard from you, and so we wanted to know if you were okay.”

Pooh looked at Piglet, and Piglet looked at Pooh, and they both sat down, one on either side of Eeyore in his stick house.

Eeyore looked at them in surprise. “What are you doing?”

“We’re sitting here with you,” said Pooh, “because we are your friends. And true friends don’t care if someone is feeling Sad, or Alone, or Not Much Fun To Be Around At All. True friends are there for you anyway. And so here we are.”

“Oh,” said Eeyore. “Oh.” And the three of them sat there in silence, and while Pooh and Piglet said nothing at all; somehow, almost imperceptibly, Eeyore started to feel a very tiny little bit better.

Because Pooh and Piglet were There.

No more; no less.

Every month, Out Doors Inc. gives our Participants a chance to share their stories and passion projects. If you’d like to learn more or get involved, contact us at marketing@outdoorsinc.org.au

Stay Connected with Out Doors Inc!

About Out Doors Inc.

Out Doors Inc. (Out Doors) is a statewide, not-for-profit mental health organisation that offers a range of recreational and active outdoor programs that cater to all ages (16+), fitness & experience levels, from beginners to advanced for better mental health.

Out Doors Inc. acknowledges the Traditional Owners of Country throughout Victoria and pays respect to their Elders past and present. We mixed things up a bit with our recent come and try rock climbing day – with the chilly weather we thought it was the perfect chance to run an indoor activity for once. The kind staff at @northwalls in Brunswick opened the gym early just for us and briefed the team on safe climbing skills. Once the induction was complete, the team gracefully challenged themselves on the verticals and slightly overhanging wall. After many hours, the team was spent! So, we set off to Royal Park for a nice leisurely stroll before heading back to Out Doors.Have you ever considered giving rock climbing a go but weren’t sure if it was right for you? Climbing is doing a great job of making the sport as inclusive as possible. We love to help people access new, challenging activities like climbing, but we’re not alone. There are other great organisations out there like @adaptiveclimbingvic that are helping more people get the chance to experience rock climbing. Here’s a link to a recent article by the ABC about the subject - www.abc.net.au/news/2022-06-15/rock-paraclimbing-disability-adaptive-climbing-victoria/101152316 #outdoorsinc #getoutdoors #rockclimbing #comeandtry #adaptiveclimbingvictoria #trysomethingnew ... See MoreSee Less

Out Doors participants, Caz, Tammy, and Brad have written this beautiful piece about their experiences on the Great Ocean Road Wellbeing Holiday. Here's a sneak peak… "At night we liked to sit on the balcony and listen to the ocean. It was so loud we felt like we were sitting on the beach. We could hear the waves noisily pounding, breaking, and coming into shore. It was a wonderful sound and we felt like we could sit there forever."Click the link to read the full article: bit.ly/39TdmMD #outdoorsinc #getoutdoors #wellbeing #greatoceanroad #participantstories #bettermentalhealth ... See MoreSee Less

With the winter solstice approaching, a group of us set off to Bright for some time in the mountains. We enjoyed walks around Mount Buffalo where we encountered Eurobin Falls in full force thanks to all the recent rain! Throughout the week we explored the region with a selection of short walks around Bright, Beechworth, Myrtleford, and more. It was a great group dynamic with everyone getting along well and enjoying themselves – especially when we were in the snow. One evening Ricky made everyone scones for everyone and we enjoyed some Scrabble most evenings around the fire. A great week all up. #outdoorsinc #getoutdoors #abrightadventure #bright #snow ... See MoreSee Less

Your ticket for the: Participant Stories: “Pooh Bear and Peer Support”