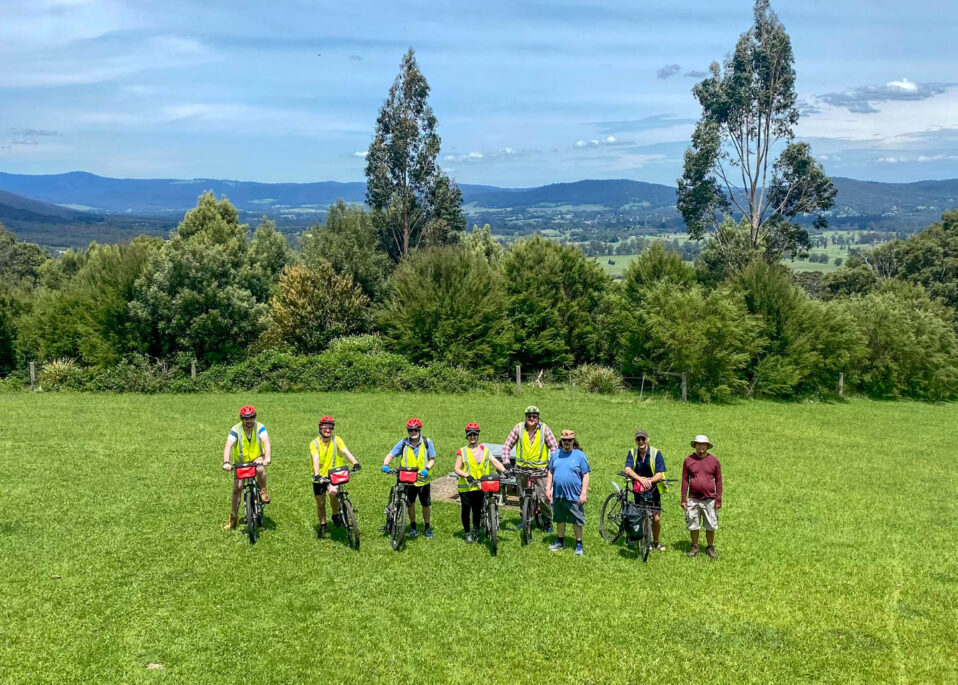 In early November a group of participants had the opportunity for another great trip, this time bike riding in the Yarra Ranges. We did day rides on some of the most popular cycle trails in the area. The Yarra Ranges National Park is part of an Aboriginal cultural landscape in the traditional Country of the Wurundjeri People. The accommodation was in pleasant surroundings with plenty of native birds and farm animals and virtually no mosquitoes – but, at certain times, plenty of flying termites. We each had our own room.

Day 1. Although described as a Rail Trail between Emerald and Cockatoo, it was more hilly than expected but nonetheless a good way to start a cycling trip.

Day 2. This was more what we were expecting and we did a total of 30kms. We certainly earned our meal and rest at the end of the day. The meal was a special hot pot of Malaysian origins prepared by Pei Ting and topped off by an evening visit to the summit of Mount Donna Buang to view the eclipse of the moon, the red moon.

Day 3. We decided on a rest day following our 30kms the day before, visiting Warburton town and again visiting the summit of Mount Donna Buang to scale the viewing tower and take in the sights. The walk through the forest was both rewarding and relaxing.

Day 4. O’Shannesy Aquaduct Trail was another good ride of approximately 15 km, followed by riding back to the accommodation in Millgrove which was very pleasant. We then visited the Upper Yarra Reservoir and its surrounds. The force of the water coming out at the base of the dam wall was something to behold.

Day 5. Another day and another reservoir, this time Maroondah. As usual these days, the overflow was spectacular and the surroundings were impressive. Some of us ate leftover pizza from the previous night’s dinner for lunch. From there we went to the Yarra Valley Chocolaterie and Ice Creamery where 2 scoops were enormous and equally enjoyable. A fine way to finish off the program.

Stay Connected with Out Doors Inc!

About Out Doors Inc.

Out Doors Inc. (Out Doors) is a statewide, not-for-profit mental health organisation that offers a range of recreational and active outdoor programs that cater to all ages (16+), fitness & experience levels, from beginners to advanced for better mental health.

Out Doors Inc. acknowledges the Traditional Owners of Country throughout Victoria and pays respect to their Elders past and present. Are you ready to make a difference in your community? Join us for our upcoming online Mental Health First Aid course between 9am - 12pm on Feb 14 & 15. Learn the skills and knowledge to provide initial support to those in need until professional help arrives. Our course includes a self-paced eLearning component and 2 instructor-led sessions via video conferencing, all based on guidelines developed by those with lived experience and health professionals. Let's come together and support each other in times of crisis. Sign up now! www.outdoorsinc.org.au/event/mental-health-first-aid-course-february-2023/?event_date=2023-02-14 #MentalHealthFirstAid #CommunitySupport #TogetherWeCan ... See MoreSee Less

Learn how to provide mental health first aid to friends, family members, co-workers and other adults in your community.
View on Facebook
· Share

Get ready for adventure, Brimbank! Out Doors Inc. is bringing the great outdoors to you thanks to our hub at the St Albans Community Centre (STACC). Come by every Wednesday from 10 am to 3 pm from 8th of February to learn about all the amazing outdoor mental health and wellbeing programs we have to offer. Whether you're a seasoned pro or new to nature-based wellness, we have something for everyone. Our team of friendly and qualified Program Coordinators will be on hand to answer your questions and help you get started on your journey to better mental health. Don't miss out on this opportunity to explore the great outdoors and improve your wellbeing. See you at the hub! #mentalhealthrecovery #outdooradventures #getoutdoors #brimbank ... See MoreSee Less

Get ready for an out-of-this-world experience! Join us on a two-day adventure in Central Victoria from Wednesday 22nd to Thursday 23rd February. Explore native forests, mineral springs, and historical gold rush towns. But the real highlight of the trip? An evening visit to the Ballarat Observatory for an immersive interstellar experience! Don't miss this chance to see the stars like never before. Contact us today to register your interest. #ballarat #centralvictoria #adventure #stargazing #interstellarexperience #victoria #ballarat #mentalhealth #getoutdoors #natureconnection #connectwithnature #naturedose #natureforwellbeing #humanwellbeing #naturewalk #natureadventures #outdooradventures #outdoors ... See MoreSee Less

Your ticket for the: Participant Stories: “Cycling Yarra Ranges”